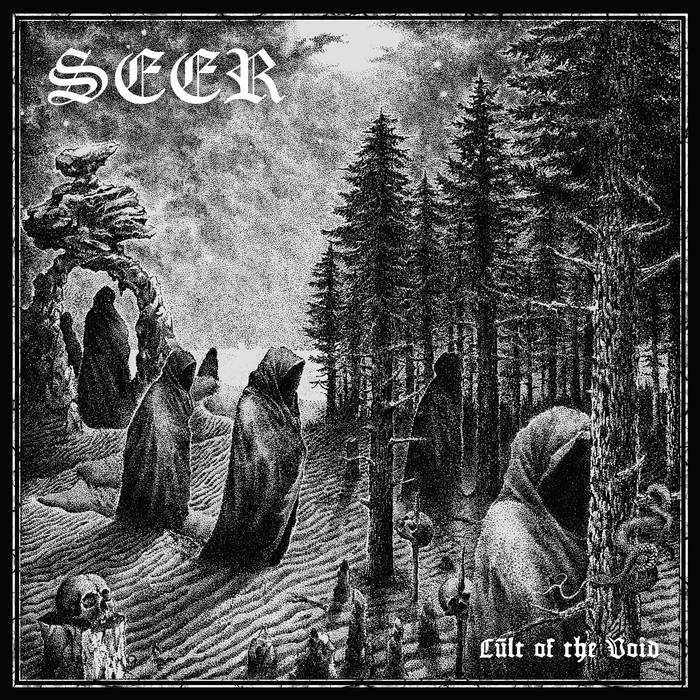 Art of Propaganda is proud to present Seer's highly anticipated second album, Vol. III & IV: Cult of the Void. Hailing from Vancouver, British Columbia, Seer was formed in the fall of 2014 as the days drew short and a chill set in the air. Very much a product of their environment, the band draws inspiration from the natural power of the Pacific Northwest and harnesses it into epic, expansive doom-sludge. Amid the region's awe-inspiring mountains, serene temperate rainforests, and immense Pacific Ocean, Seer’s backyard is occupied by lakes, rivers, evergreens and abundant wildlife. Such a proximity and affinity to the local natural world has kindled a deep and ever-present connection to nature for Seer, resonating in an authentic and organic approach to their music. This combined with a true rock 'n' roll spirit and inclination toward fantasy, science fiction, and the occult make up the foundation on which Seer lays its colossal riffs and Cascadian atmospherics, all of which overflowed across the vast vistas of their debut album, Vol. 1 & 2 - released early last year by Art of Propaganda to widespread critical acclaim - and which overflow even further across the even vaster follow-up, Vol. III & IV: Cult of the Void.

Whereas Vol. 1 & 2 patiently built its walls of tectonic, sludge-strewn doom, right from the very beginning, Seer explode into Vol. III & IV: Cult of the Void with an immediacy that's startling to behold. In fact, with its preponderance of harmonic, instantly hummable riffage and more pronounced usage of clean vocals, one could be mistaken that this is almost a different band. But alas, it's somewhere between the proverbial red herring and deceptive calling card, as Seer here brim with an infectious confidence that allows them to incorporate - anywhere, anytime, at will - more diverse (and more accessible) elements into their still-moltenly-overflowing sound. There's more peaks and more valleys - and tons more rolling hills, whereby the band can charge forward with straight-up stoner and even grunge tropes - across Vol. III & IV: Cult of the Void, and the manner in which Seer sew them altogether suggests an entity at the height of its powers. No one-dimensional, endlessly tedious chugging here: the paths are long and winding across this album, and the listener never quite knows where they'll go next. And yet, Seer still put emphasis on the thematic and conceptual, and after the addicting rabble-rousing of its first half, the latter half of Vol. III & IV: Cult of the Void goes into more spacious 'n' desolate territory, with a grandiose, almost gothic Americana aesthetic completing the album's arc. It's a fitting, fearless end for a young band who are just now becoming cognizant of their poignant power: this is Canada's Seer anno 2017.

Recorded and mixed by Stuart McKillop at Rain City Recorders in Vancouver, BC
Engineered by Mark Mckitrick and Mark Lingelbach
Mastered by James Plotkin at Plotkinworks in Bethlehem, PA